Urgent call for support: A young man in Brazil needs urgent help
Araruama / Brazil. September 29, 2015. (and). Sebastian A. had a serious accident on September 3, 2015 in the country of Brazil. He is a world citizen from Germany. He is in urgent need of private help, support and aid as he has no medical insurance and has to pay all of his medical bills while in need of urgent treatment in a local hospital of Brazil, which is the Hospital Regional de Araruama. The German Embassy in Rio de Janeiro has been notified and has been called for help already. The official authorities have knowledge about the ongoing emergency of the Sebastian A. (36).
The heel of the young man is broken. An infection of the wound has caused serious problems. The expectant father has strong pain.
Because he has no medical insurance the young man has to pay all medical treatment of the hospital himself from his own money. Therefore all people and readers are requested to support a young man from Germany in Brazil and his daughter and pregnant girl-friend.
The Hospital Regional de Arauama is located about 90 kilometers far away from the city of Rio de Janeiro in Brazil. More information about the ongoing emergency are available on Facebook provided by the group “49 cents for Basti ´s leg rescue” on https://www.facebook.com/groups/1465472597116168 and on a local website which is called “Who is going to help Sebastian” in German language “Wer hilft Sebastian”, on www.wer-hilft-sebastian.de .
Sebastian could be even in the danger to loose his leg. Certainly anyone would try all things to avoid a possible amputation of his leg. Therefore we do ask to support this young man, his daughter and his girl-friend in urgent need.
Anyone who wants to donate some money to help Sebastian A. to pay his medical bills may donate some money to:
Account information and bank data:
Sebastian Nenzel
IBAN: DE55700222000072071611
BIC: FDDODEMMXXX
Fidor Bank
GERMANY
Code / in Concern of medical treatment hospital in Brazil 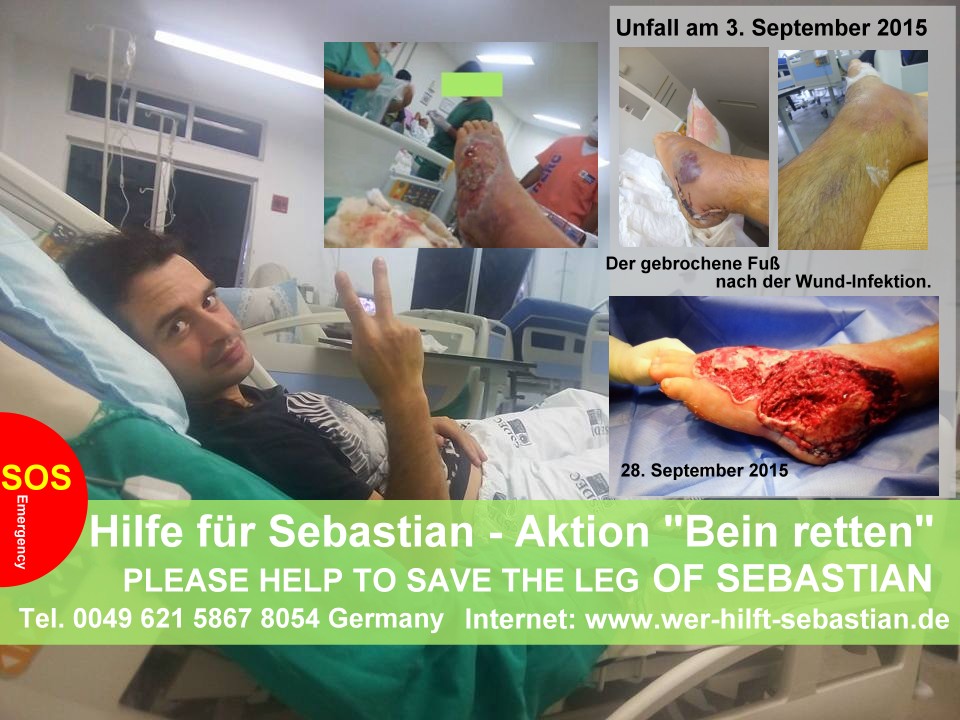